Project of the Year Award Winners

Ludowici is pleased to announce the winners of our annual Project of the Year contest.  We asked for submissions of the best projects with any recent use of our product—residential, educational, new construction, renovation, & more.  The following are the Winners and Runners-up for each Project of the Year category: 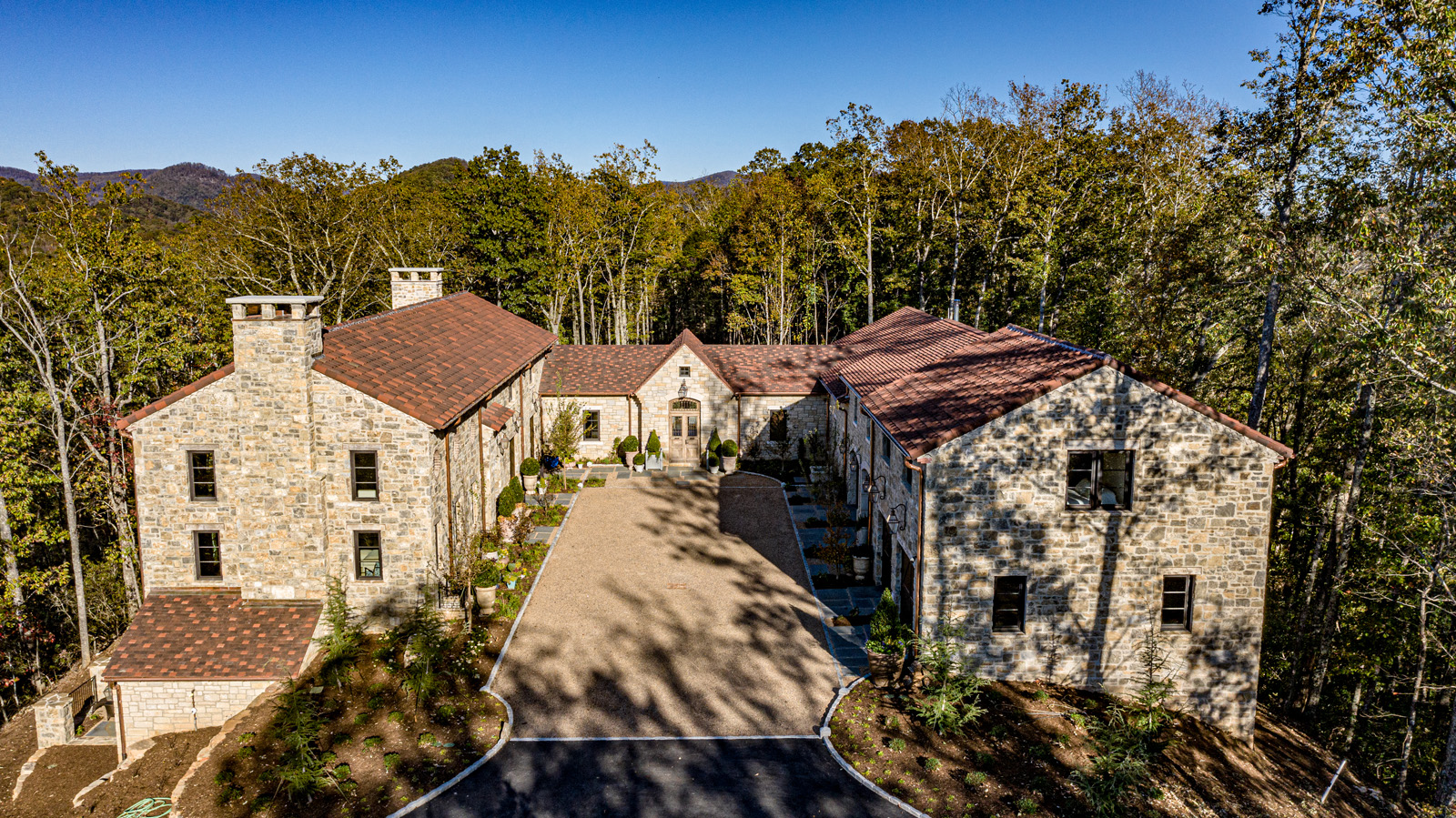 
This home was built on the premise of longevity. Family structures change over time and this home was intentionally designed to reflect and cradle those implied changes. This was achieved by making the home appear to be built over the course of many generations. Additions were made, windows and doors removed and added, the landscaping is a collection of heirloom plants and urns; Every part contributes to the narrative that this home will be here long after the current residents have handed over the stewardship to their children.  Despite being a home full of every modern amenity, we selected materials to create a variance of vintage within the architecture. The stone, roof and details vary throughout the home to allude to the changes made during the evolution of the home. This estate is poised on the top of a ridge so the owner can oversee the surrounding groves and bottom land. It captures the last drop of evening sun and breathtaking sunsets. This elevation all but promises it will endure the harshest storms mother nature can produce. With these considerations in mind, every material in the home was selected to stand the test of time and weather the elements. From day one, the roof was never under discussion for compromise. We selected two different Ludowici products to help reinforce the narrative of the home. We used a barrel tile to create an “expected”  look on the oldest part of the home and a hand-warped flat tile for a more refined look on the more formal parts of the home to compliment the limestone details. We felt these products were the perfect solution for the aesthetics and permanence of the home and cannot be happier with the outcome. Our newly custom design-build home evokes timeless elegance and stately presence, embedded into the natural surroundings atop a grand mountain, revealing panoramic views and breathtaking sunsets. This magnificent home is very unique from the story that surrounds the home to the delicate balance of old-world architecture and new-age product lines. Our clients’ are worldly travelers, spending many wonderful times in the south of France. Their vision was clear, they desired a home that would feel as if it had been a part of the earth for generations, taking on new structural growth over time. The overall goal for our architectural team was to determine superior products that would compliment the narrative stylistically while providing a superior quality and build integrity. We chose the Brittany & Straight Barrel product by Ludowici for these reasons. We were able to easily customize the product with mortared end closures of the barrel tile to create and eave detail more fitting to the architectural style of the home. 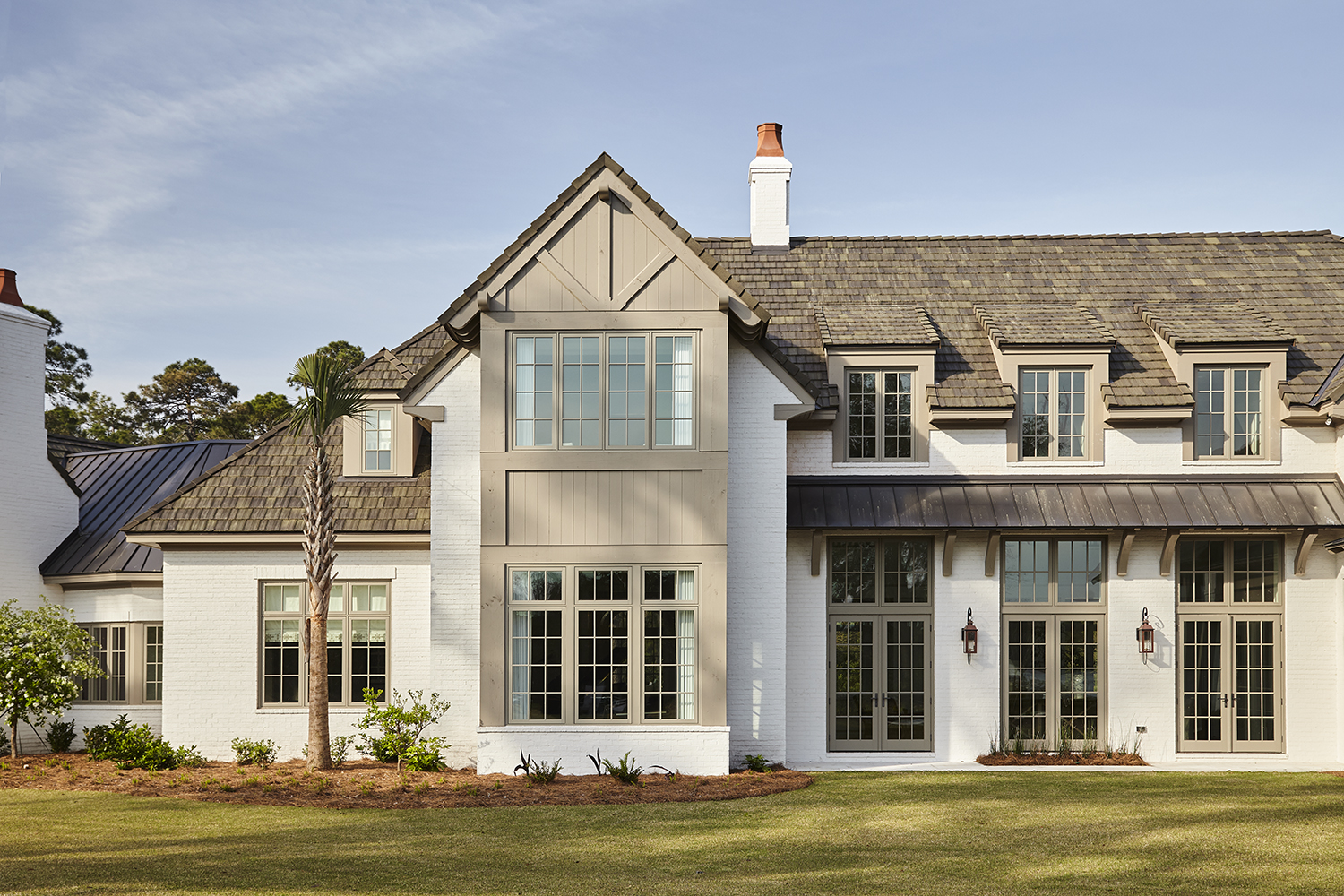 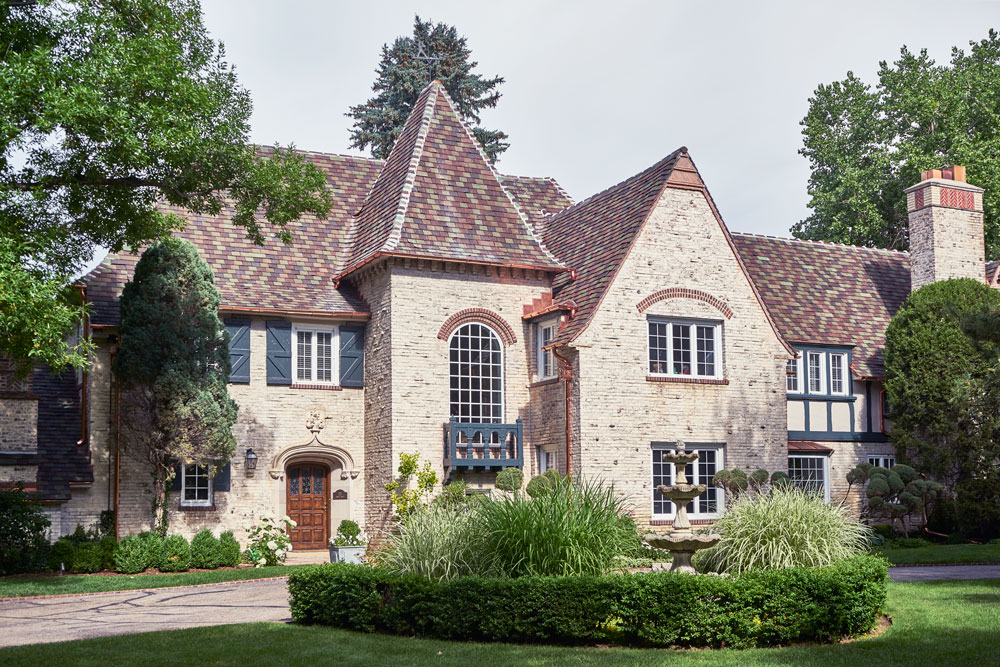 Built in 1931 this 10,380 sq/ft Tudor Style home is located in Cherry Hills Village just outside of Denver, CO. The roof on this beautiful home was damaged by a large hail storm in 2018. Rick and Mason Hunter with Precision Construction and Roofing worked closely with the homeowner’s insurance company to restore their home to its original look. Along with the roof replacement all the copper flashing and copper gutters were replaced.  This project took six weeks to complete with varied complexities and unique product and color matching by Ludowici.

One of the more notable homes in Milwaukee, located near the shore of Lake Michigan. Original green Spanish tile was removed and replaced with new Ludowici Spanish. The original underlayment was replaced with heavy roll roofing with an additional layer of ice and water shield at the eaves and valleys. 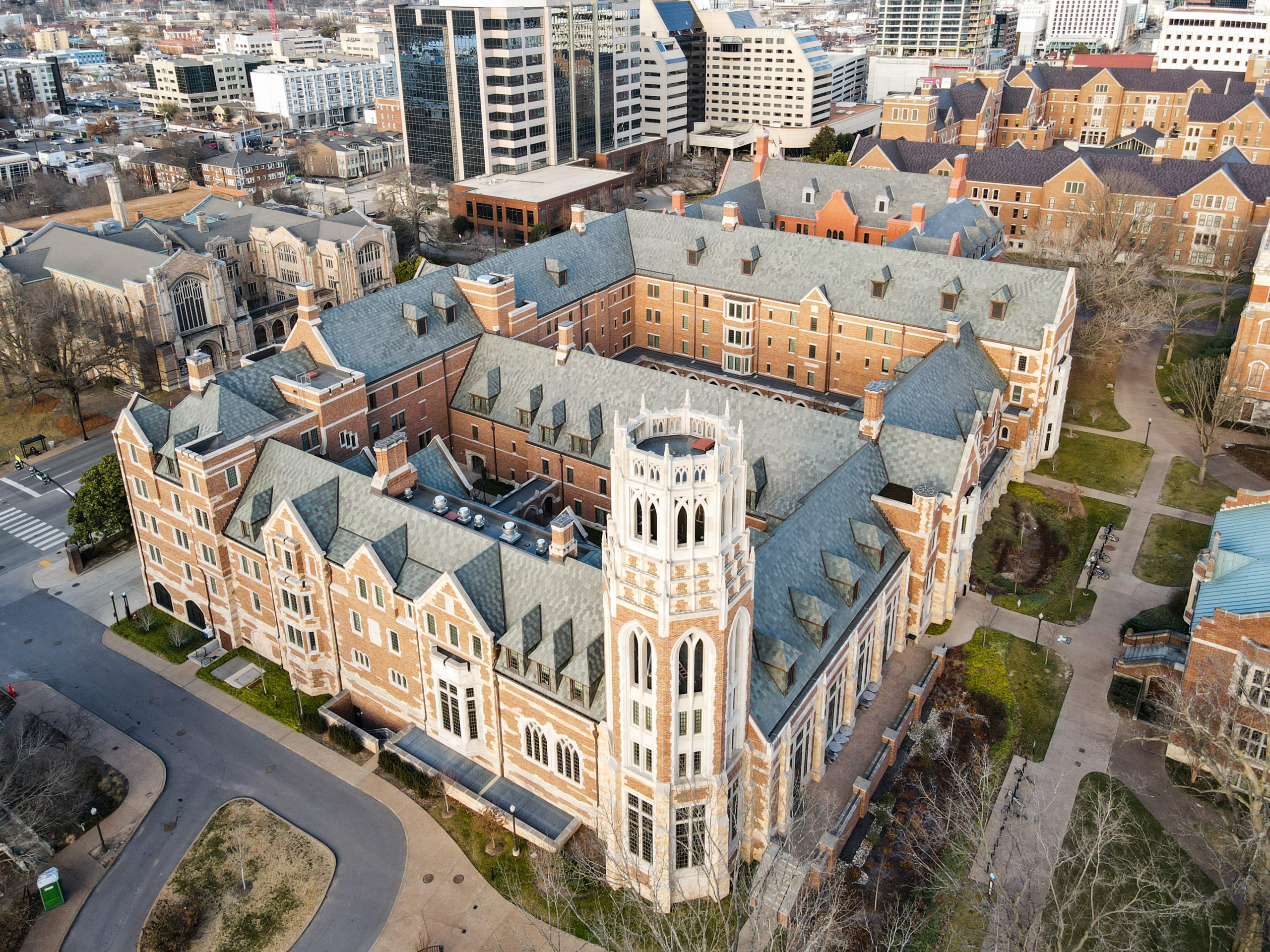 Ludowici LudoSlate tiles were chosen as a lightweight alternative, guaranteed to last 75-years.  Tiles were also used vertically on the dormer walls, and Ludowici made integrated siding corner tiles to be used on the dormer corners. 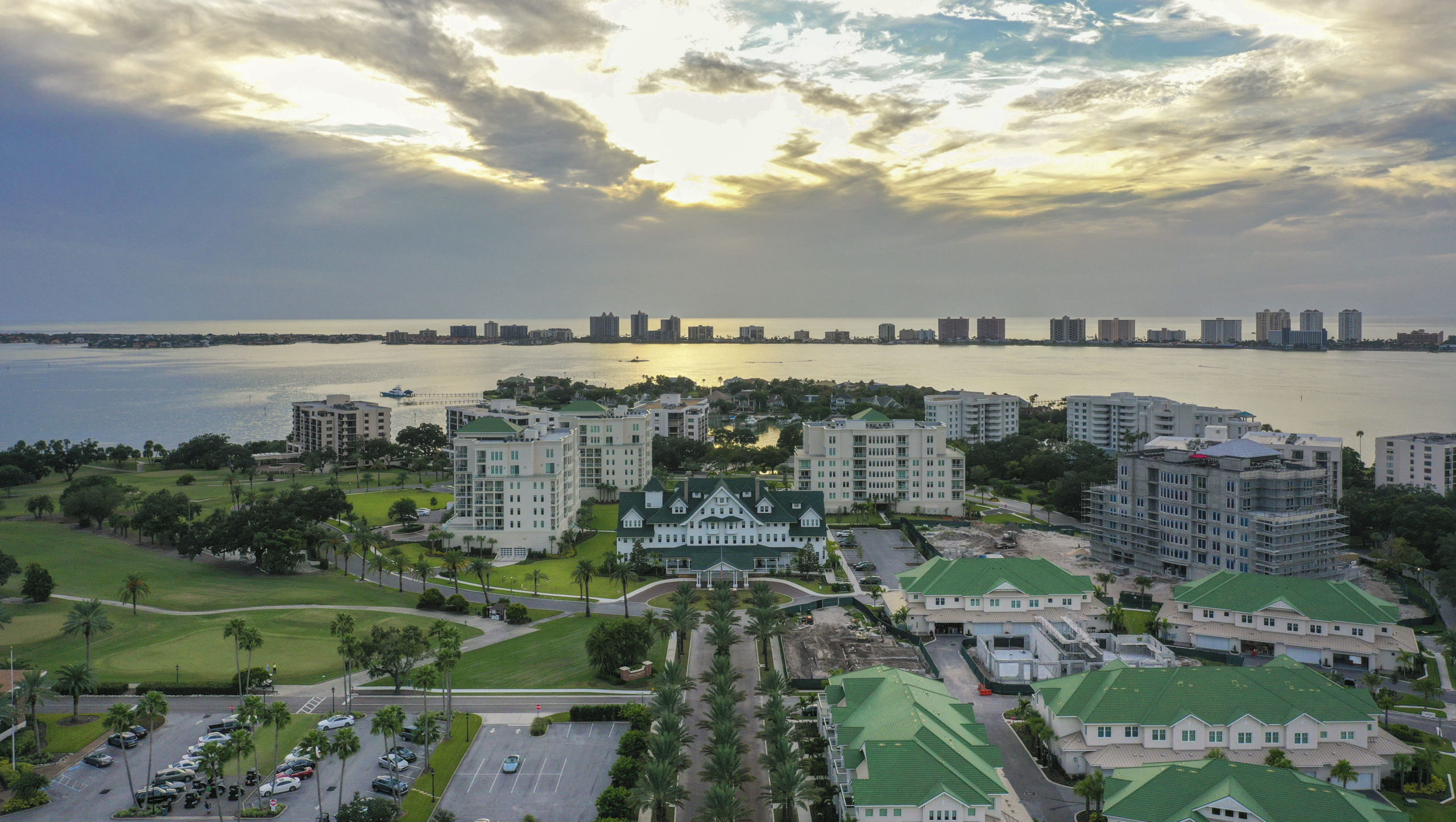 This new construction project includes 11 different buildings on the historic property that was once home to the Hotel Belleview. Premiering in 1897, the 400,000-square-foot Hotel Belleview, constructed of heart pine wood imported from Plant’s Georgia estate, sat on a 35-foot-high bluff overlooking what is now Clearwater Bay. While purposely intended to be less elegant than Plant’s other nearby luxury hotel, the Tampa Bay Hotel, The Hotel Belleview was still undeniably resplendent, with ornate gingerbread-like details such as peaked gables, overhanging roofs, and wide verandas. It was also equipped with the latest in amenities, such as steam-generated electricity, at least three electric lights in each of its 145 guest rooms (unheard of at the time), a lobby-based telegraph, and even entertainment from a resident orchestra. And as the years went on, The Hotel Belleview only became grander. Plant’s son, Morton Plant, who took over operations after the death of his father in 1899, painted it white and changed the roof titles to green, earning the hotel the nickname of the “White Queen on the Gulf.” He also added an Olympic-sized swimming pool adorned in Italian tile and two 18-hole golf courses designed by the legendary Donald Ross, which are still in operation today. It was the kind of Florida Gulf resort hotel the Tampa and Clearwater area had never seen.

Today’s Belleview Place Community is set high on a bluff with magnificent views of Clearwater Harbor and the Belleair Country Club’s two golf courses, Belleview Place’s 132 luxury condominiums and two-story carriage homes are now taking shape on the site of the former Belleview Biltmore hotel. Its remaining lobby and 35 guest rooms were moved and are currently being transformed into a boutique hotel: the Belleview Inn. The Inn reflects the unique historic connection of Belleview Place and sets the tone for the elegant and graceful lifestyle residents will enjoy. 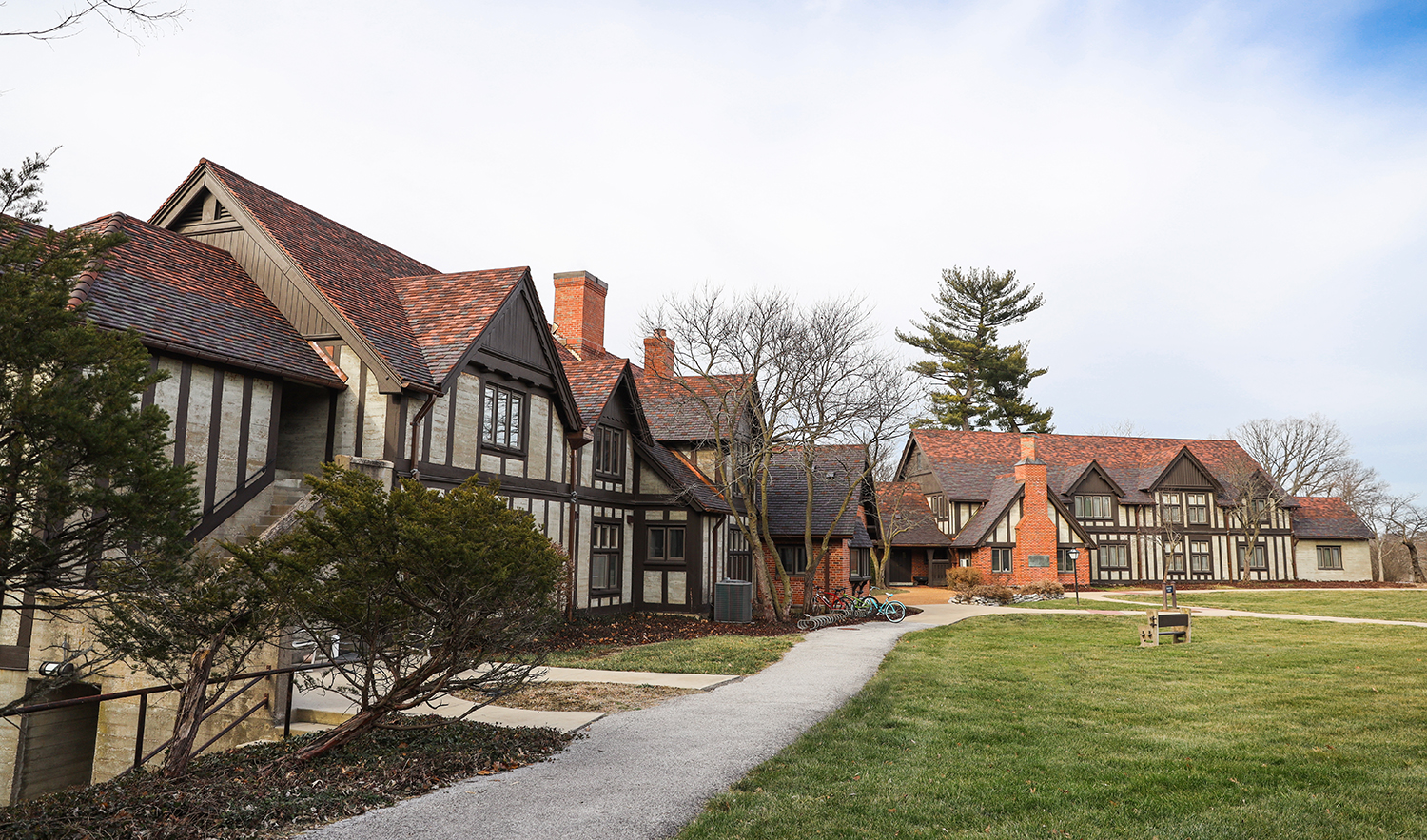 The Sylvester House was originally built in 1931-32, and additions added on in 1945-46. This is a very large residence hall for women. Ludowici met Principia’s highest standards and delivered a high performance, quality, grade 1 material in the profile and colors that matched the original Maybeck designs from 1946. The most challenging part of this project was being able to closely match Bernard Maybeck’s vision of a custom four-color blend. Once matched, the installer’s painstakingly matched the originally specified color transitions that were designed to be darker at the eaves and move to a lighter color at the ridge. Being able to maintain the blend and the transitions across the various roof conditions, gables, dormers, and various heights added to the challenge, but in the end, the result is breathtaking, and the College is proud to pay tribute to Maybeck, and his legacy lives on. 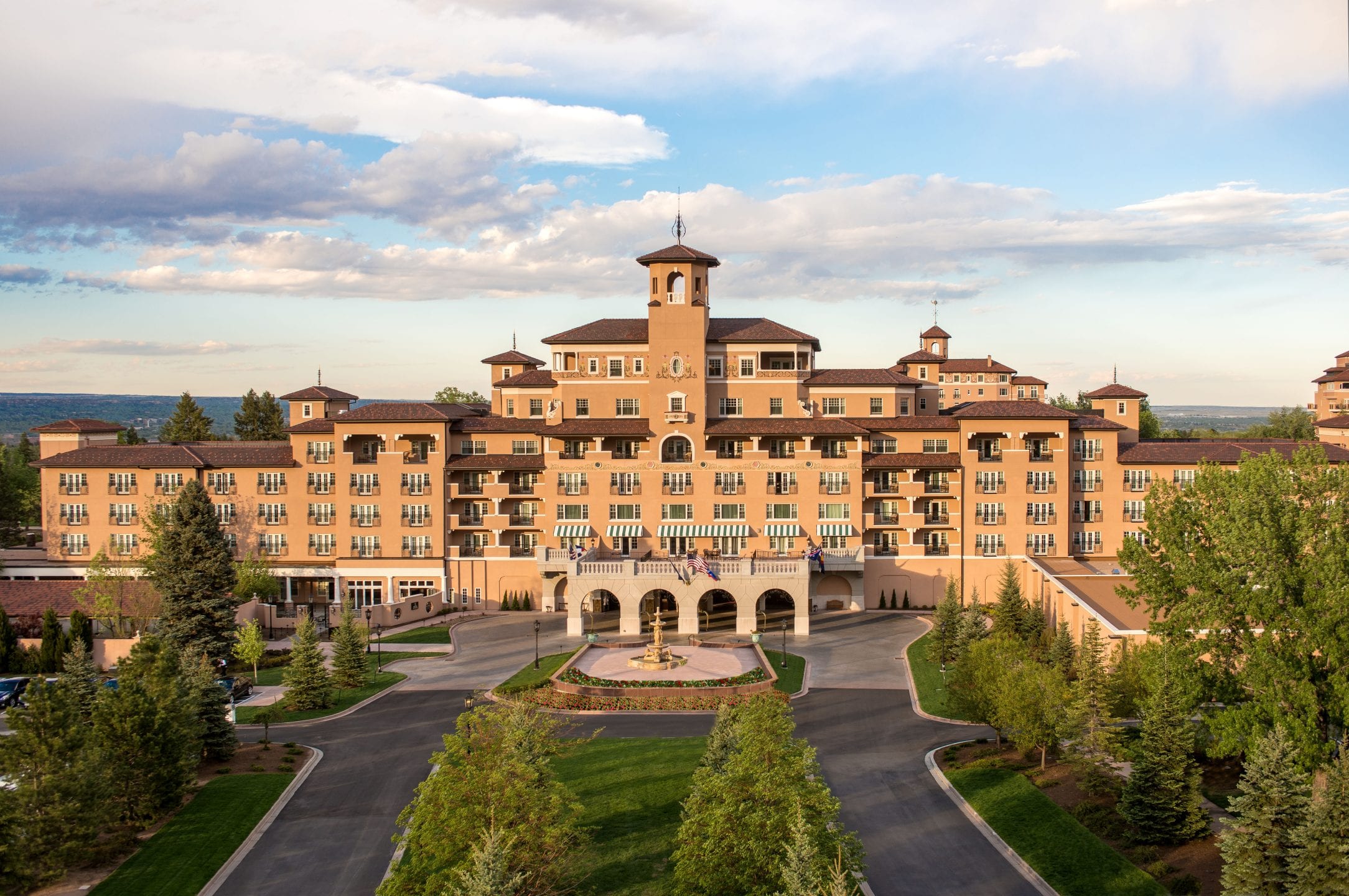 Ludowici Tile was the existing tile in place on the Broadmoor Hotel and were chosen for the renovation. The Broadmoor Hotel itself is an iconic Colorado Springs landmark and has a robust history dating back to the early 1900’s.
Unique Challenges included:
Safety – hotel clientele were interacting on the site on a daily basis, so precautions had to be put in place to protect not only the workers but the general public;
Weather – Colorado is known for its drastic weather changes on a daily basis in the winter months; and
Height – many of the roofs are at greater heights than normal so precautions had to be put in place to achieve a safe working environment. 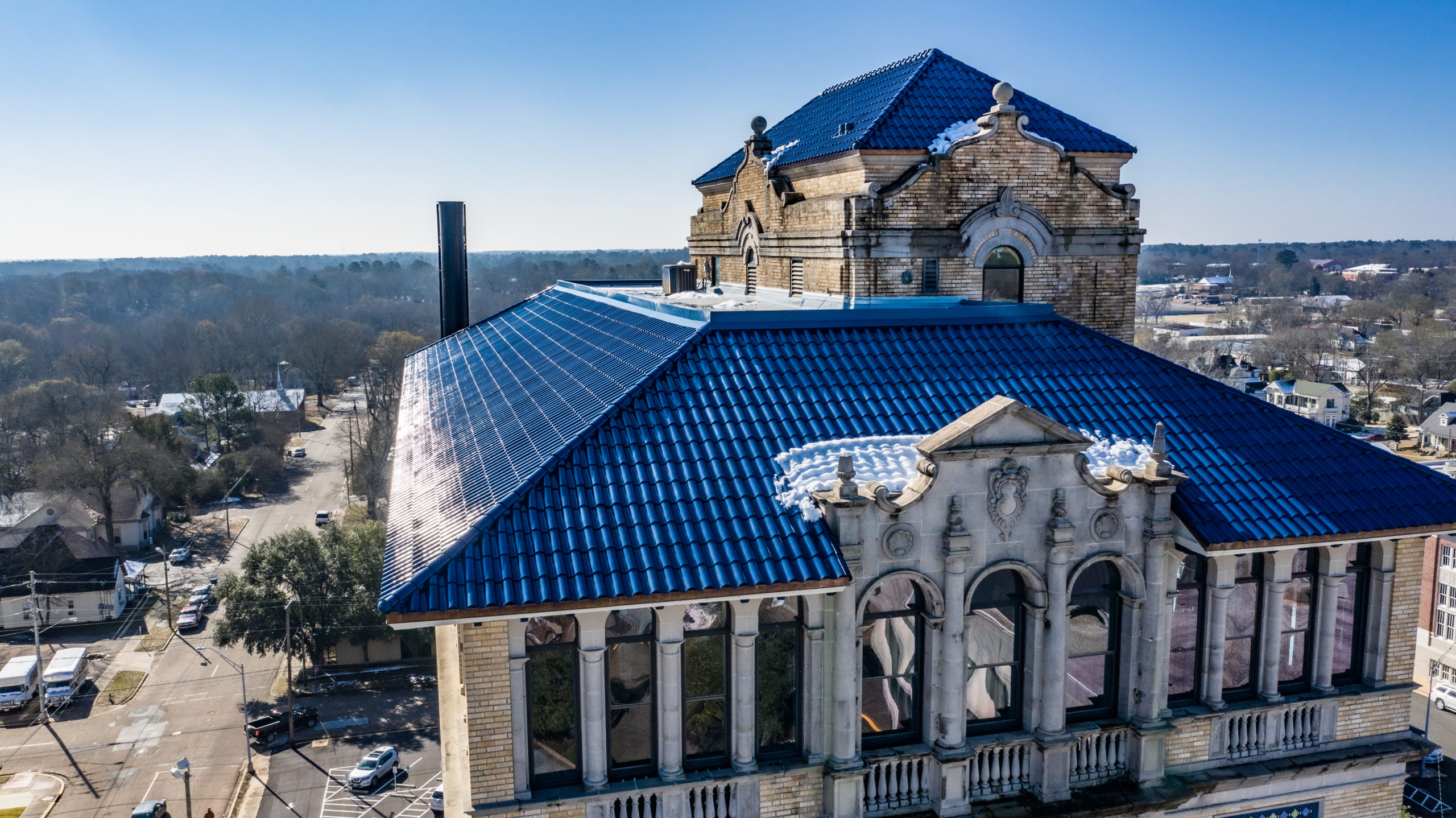 The original hotel Marshall, the tallest building in Harrison County, was designed by noted Fort Worth architect Wyatt C. Hedrick, the Grand, was built in the Italian Renaissance architectural style with Art Deco elements completed in 1929.
For several decades, it served as the principal hotel for social and civic activity the city of Marshall, and most of East Texas. The Marshal Grand served as a meeting place for businessmen and East Texas oilmen. The East Texas Oil Field which has produced more than 5.2 billion barrels that at an average price of $55/bbl, would be worth around $285 billion today.


With the advent of chain motels and a change in traffic patterns due to the construction of Interstate 20, the building became vacant in the 1960s. It essentially remained vacant until 2003 when it was acquired by Jerry and Judy Cargill. In 2006, Judge Richard and Christina Anderson partnered with the Cargill interest to complete the renovation of the entire exterior and the first two floors of the interior. In 2013, the Andersons and Cargills donated the property to East Texas Baptist University where then President Blair Blackburn undertook to restore several of the interior floors to accommodate an expanded nursing program at ETBU, which currently enjoys the distinction of having the top rated nursing school within the state of Texas. The restoration of this building from contributions by the Cargills and Andersons, City of Marshall, Marshall Economic Development Corporation, hundreds of contributors from around the community, and East Texas Baptist University, under the leadership of Dr. Blackburn, is something that the entire community takes great pride in.
The original tile installed on the hotel was a Ludowici interlocking tile it remained in place until 2013 when the previous owners renovated the building, which included a re-roofing project. In attempt to cut cost during the renovation, a lesser manufacturer than the original Ludowici was chosen; resulting in that tile to only last 7 years. “We choose Ludowici not only because of their superior craftsmanship and attention to detail; but to also guarantee we could achieve the same life expectancy of 87 years by installing Ludowici.” During the product selection process Ludowici hosted ETBU members and Jeff Eubank Roofing at their New Lexington, OH factory. The entirety of the job consisted of 15 pre-construction site visits, and 75+ on site safety meetings, amongst others. Challenges included several large cranes needed to hoist material and set scaffolding in place. Scaffolding was erected on all sides of the building to serve as a “catch deck” to protect pedestrians walking below and provide a working platform for the roofing crew.   Affixed to the scaffolding was a material hoist/ elevator served to take crew members & material and from the roof surface to the street 180’ below this hoist had a maximum capacity of 2500 lbs. per load, limiting the amount that could be hoisted each trip.

JUDGING CRITERIA
Category winners were chosen by an internal Ludowici panel and popular vote based on factors relating to appearance, uniqueness, complexity, and craftsmanship.